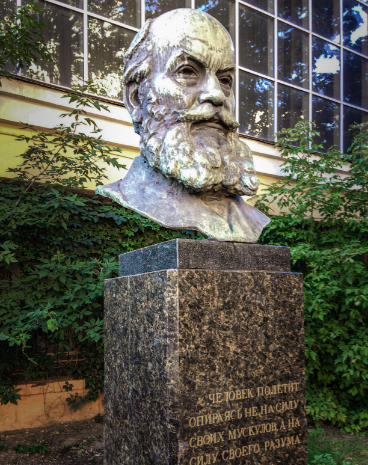 The museum is a collection-type museum, collecting and presenting materials reflecting the activities of Professor N.E. Zhukovsky, his students and associates, the creation and development of TsAGI, and the history of Russian aviation. The fund structure of the museum includes: 1. Museum’s collection of exhibits: aircraft models, wind tunnel models, sculptures, paintings, items and personal belongings of scientists and pilots, collections of badges. 2. Photographic documents fund – represented mainly by glass and film photographic negatives. 3. Documentary fund – personal and archival documents, concerning the activities of N. Ye. Zhukovsky, S. A. Chaplygin and other scientists, as well as the history of TsAGI and activities of famous aircraft constructors and pilots. 4. Book collection – the library of N.E. Zhukovsky, technical literature, books belonging to scientists, magazines, brochures published by TsAGI, as well as literature donated to the museum or purchased by the museum at various times.
0
Square metres of exposition
0
Photographic negatives units
0
Library collection units
0
Personal archives

The museum’s collection includes collections of aircraft models, gyroplanes, helicopters, gliders, the first Soviet rockets, models of the first artificial earth satellite, the Vostok spacecraft descent vehicle, models of aircraft and rocket engines, TsAGI wind tunnels. A significant part of the museum’s collection consists of authentic manuscripts, Zhukovsky’s biographical materials, his personal library, memorial items and furniture that belonged to Nikolai Zhukovsky. The real gems of the exposition are exhibits recognised as monuments of the history of technology and which can only be seen here: an authentic Otto Lilienthal glider, purchased by N. E. Zhukovsky during a trip to Germany in 1895, a model of Ilya Muromets plane designed by I. I. Sikorsky and manufactured at the Russian-Baltic Factory in 1915; a flat wind tunnel built back in 1909 at the Imperial Technical School under the supervision of A. N. Tupolev; a sunny course marker from the ANT-25 plane designed by M. M. Gromov.

The museum is known in many countries and is highly regarded among the best aviation museums in the world. In recent years, the museum has actively presented various exhibitions at the Manege, Tretyakov Gallery, Polytechnic Museum, Jewish Museum and Centre for Tolerance, Darwin Museum, Russian State Children’s Library, Festival of Technical Museums as part of the Oldtimer Gallery exhibition and others. In February 2018, the museum was widely represented in the State Duma of the Russian Federation at the exhibition “Aviation Science. 100 Years at the Service of the Fatherland”. 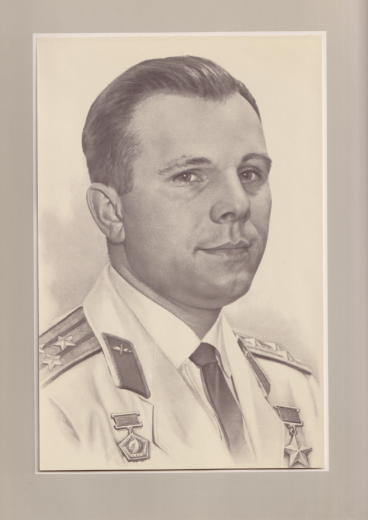 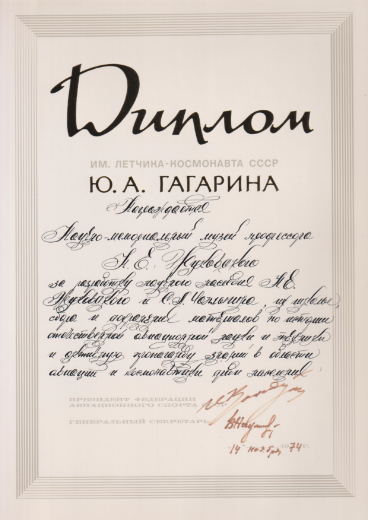 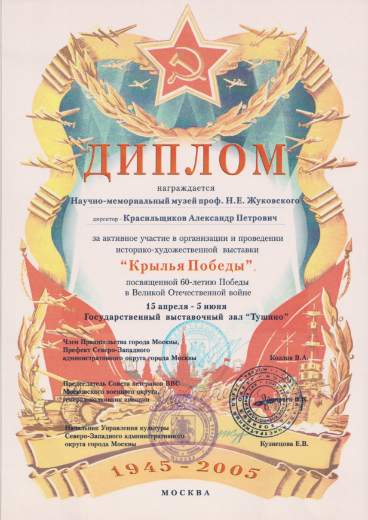 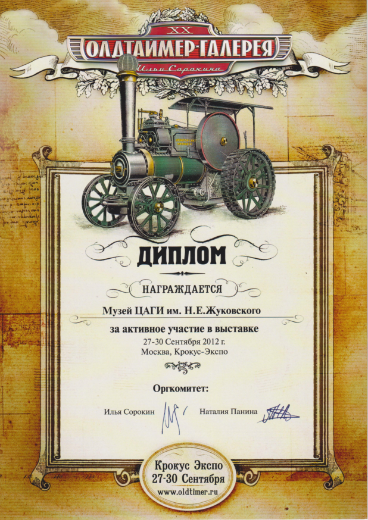 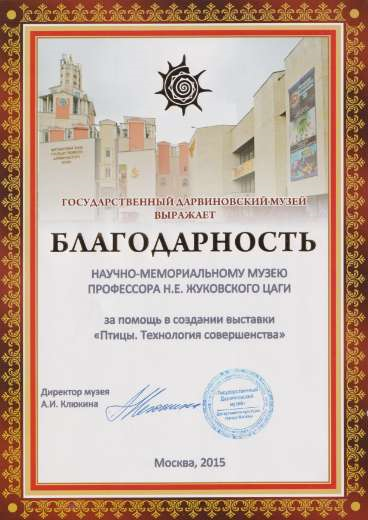 For more than 40 years, since its foundation, the Museum was headed by Nadezhda Matveyevna Semenova, Honoured Worker of Culture of the RSFSR, under whose leadership the Museum gained authority among the aviation community. She was one of the organizers of the museums of Zhukovsky in Moscow and in his homeland in the village of Orekhovo, the museum flat of Academician S. Chaplygin and the museum of the General Designer, Academician A.N. Tupolev.

Thanks to N.M. Semenova a priceless historical artifact was saved – a glider of German aviation pioneer Otto Lilienthal, removed during the “fight against cosmopolitanism” from the exhibition of the Central House of Aviation to an unheated room. It was with extraordinary energy and enthusiasm that the life and scientific legacy of the founders of the national school of aerodynamics Zhukovsky, Chaplygin and their many pupils, the creators of various branches of aviation science, were carefully researched. 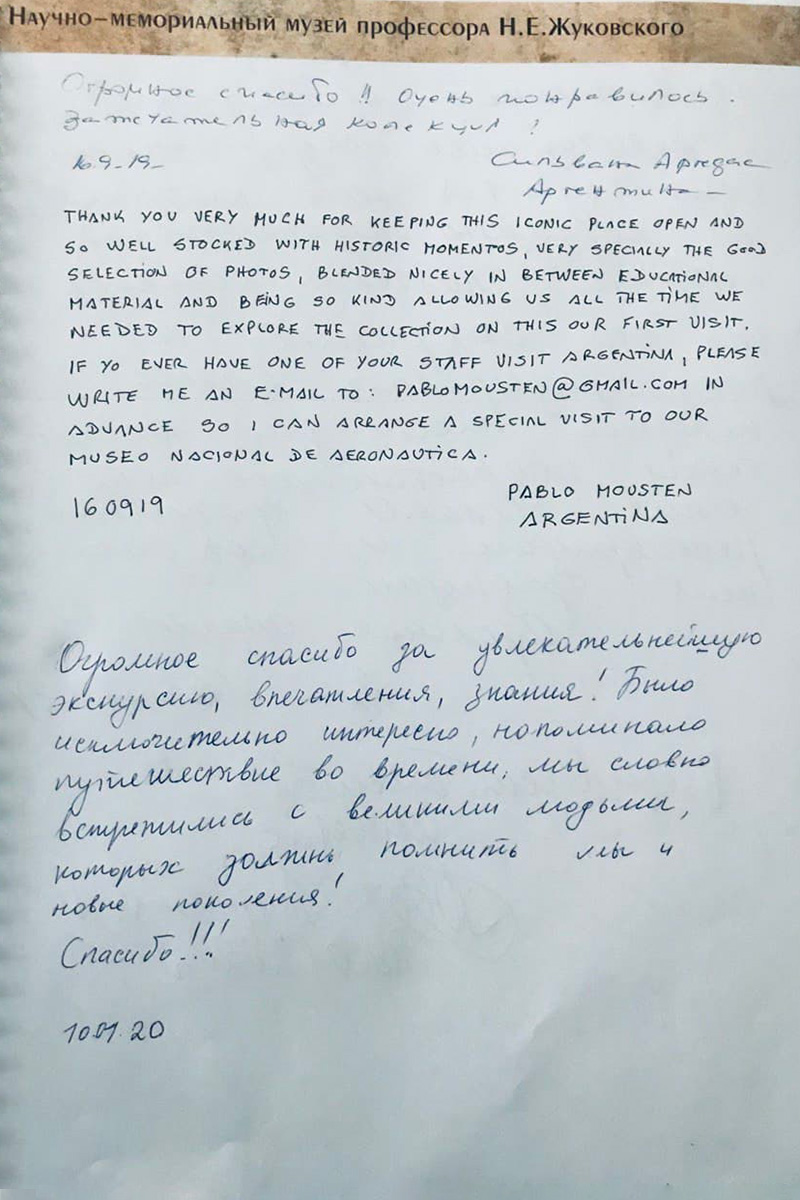 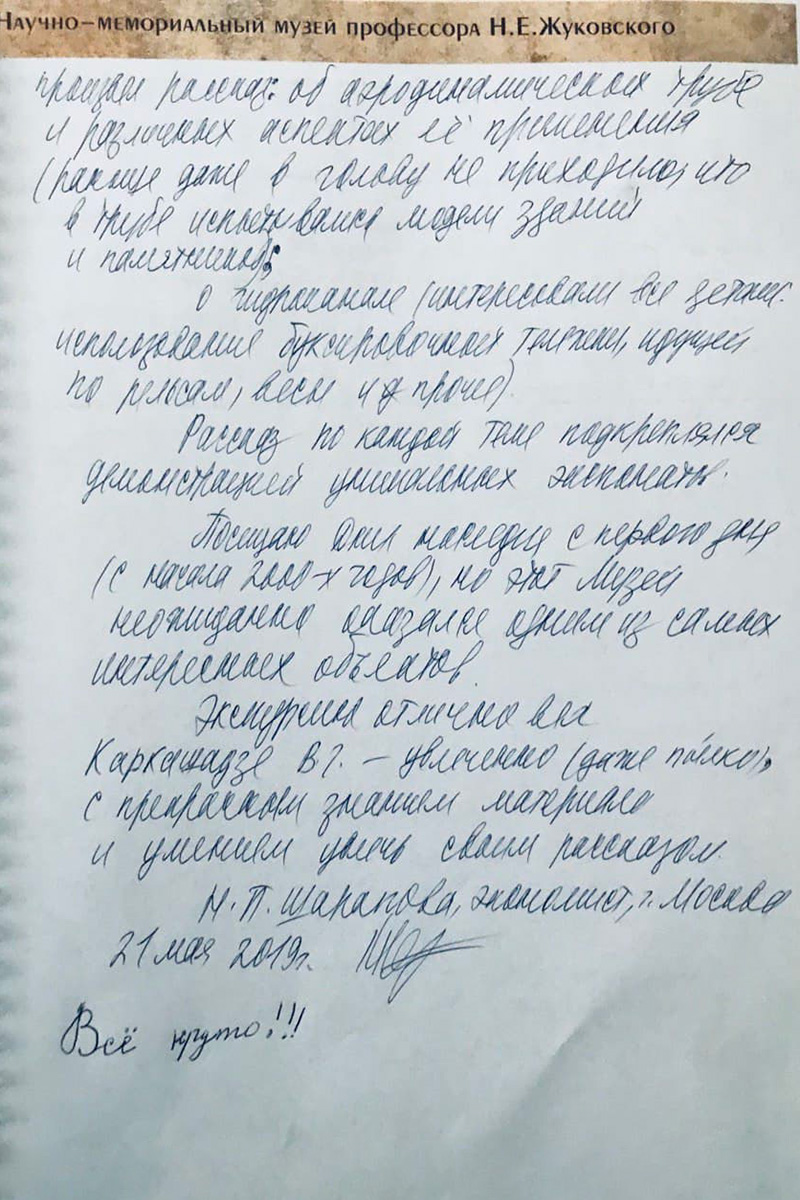 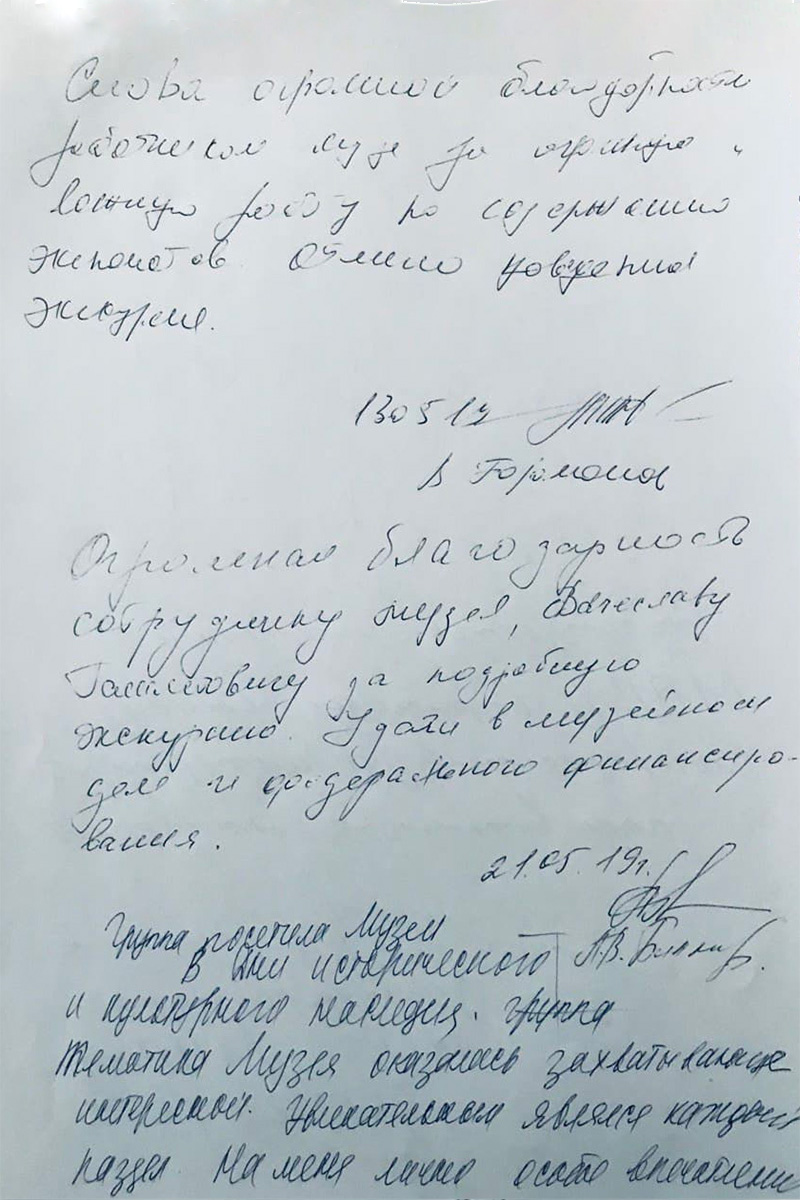 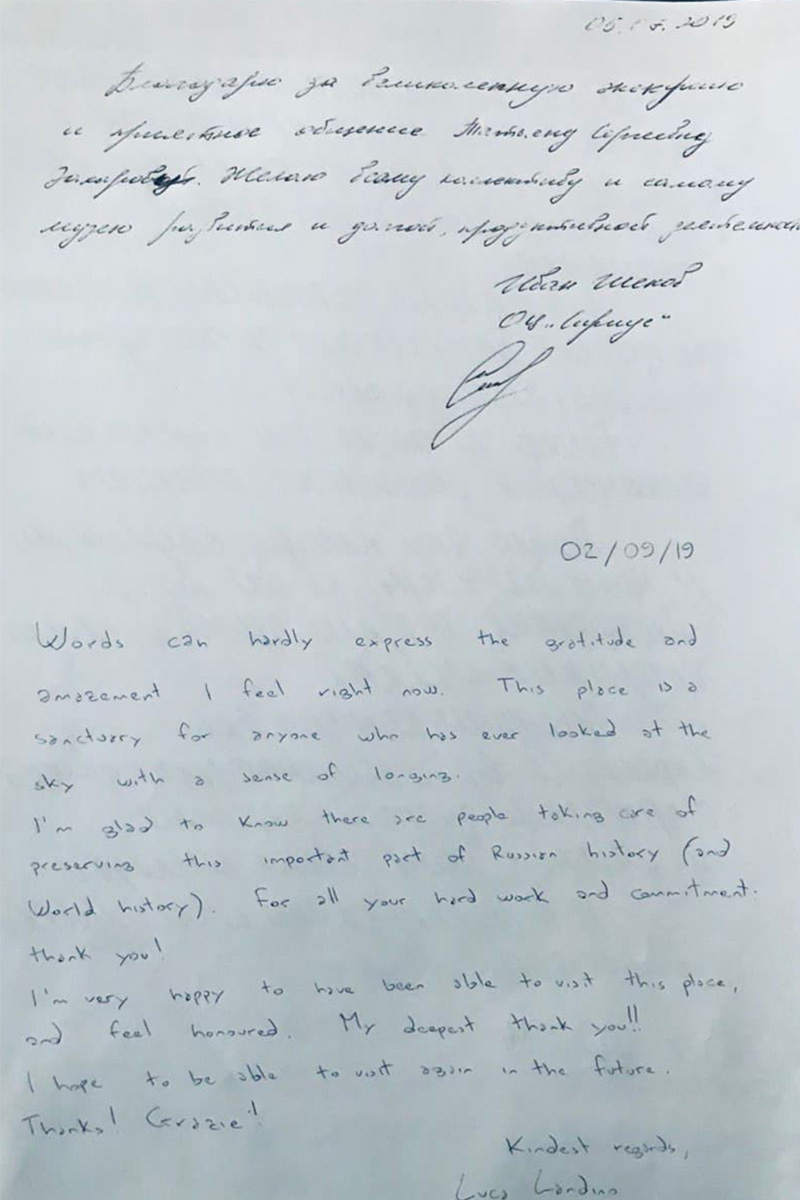 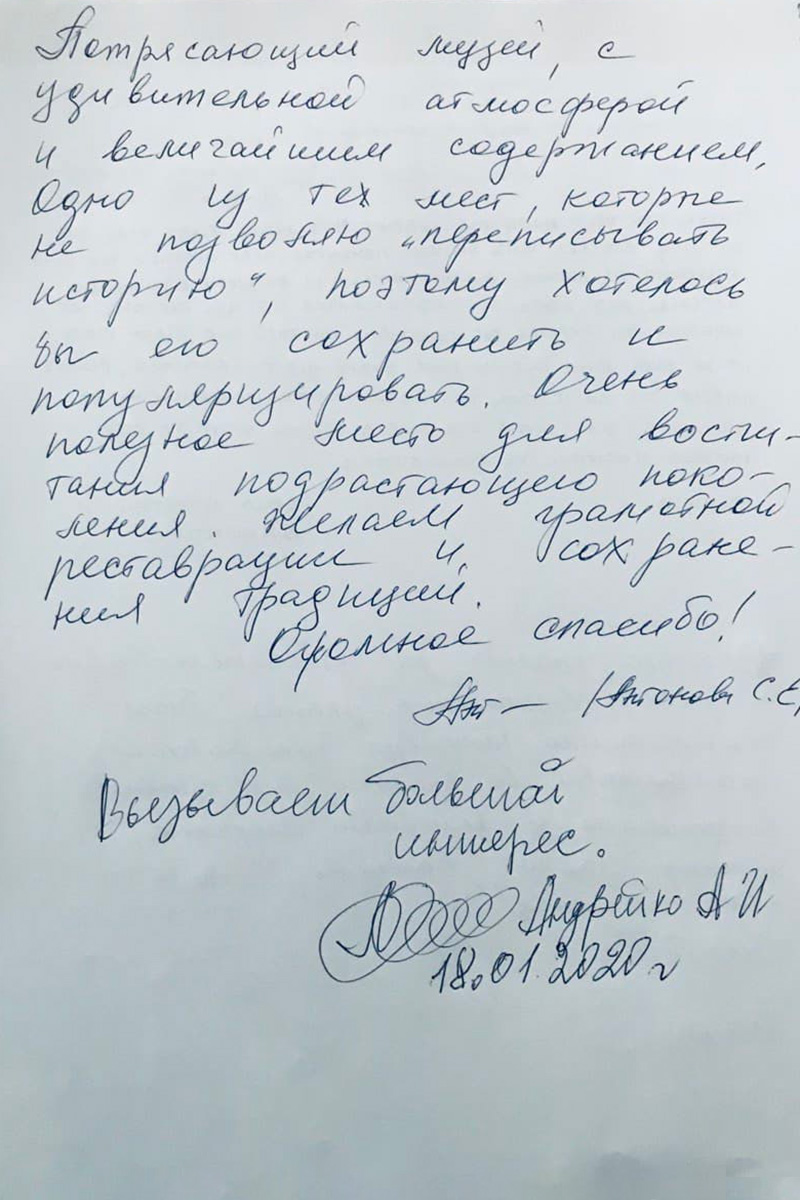